A Tales of Asnia board game

Sit back, gain glory and become rich while your mercenaries do the fighting

Glory awaits for those who deserve it… Or pay for it.

In the world of Asnia, there are three ways to gain glory:

You play as a band of four Collectors who team up to gather as many artifacts as possible, while hopefully slaying some rare beasts and do some unique quests that give you glory. Glory is measured by Glory Points and the more a character has, the more successful he or she is in life.

However, nobody said you have to do all that dirty work yourself. Just hire some mercenaries who are much more suited to do the dirty work for you! 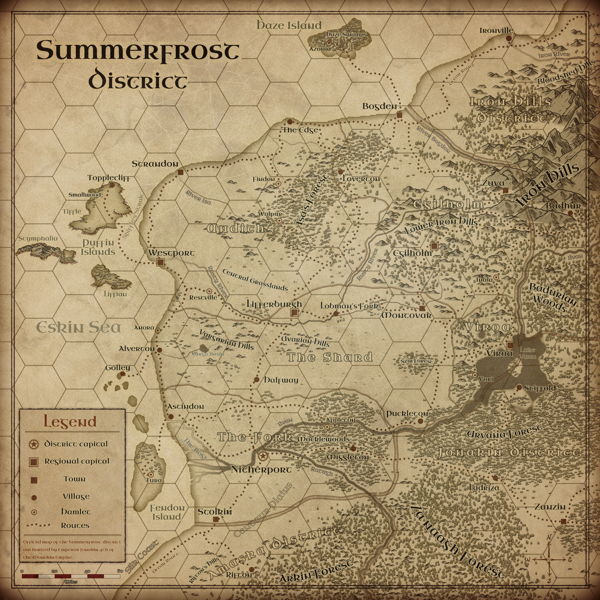 Summerfrost District – the board on which you travel to cozy villages, thriving cities, dark dungeons and mysterious caves.

Somewhere in the large, chaotic world called Asnia, in a rather remote part of the Monakin Empire, there is a district called Summerfrost. This is where our adventures begin in a small village called Alverton.

Rumors speak of an exceptionally rare artifact which has come to be known as ‘the time machine’. Many different things are said about it, but one particular phrase keeps returning every single time:

“What was once forgotten, will be remembered again.”

What exactly this means… nobody knows. But it’s pretty clear that this ‘machine‘ is one of the rarest collectibles in the world. And in the collector’s scene, the rarer a thing you get your hands on, the more glory you gain when you find it. Which is exactly why you four ended up together, forming a Band of Collectors, hoping to find glory and – of course – wealth. 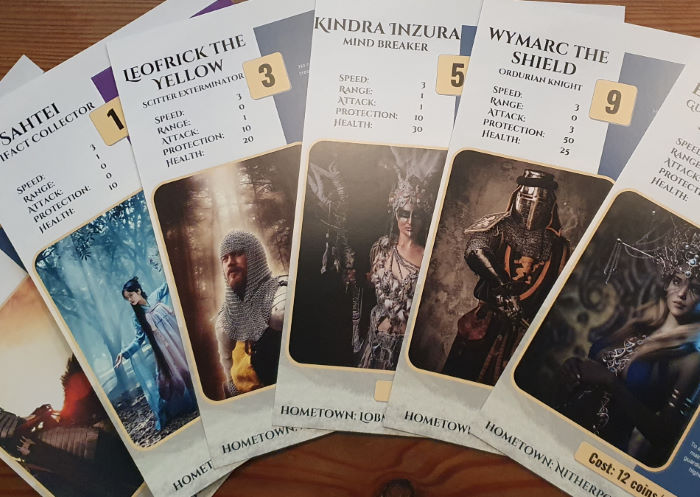 Some of the 30+ of mercenaries to hire.

Each mercenary has unique skills

The characters you can choose to play from are not the typical heroes or adventurers: a retired warrior, a bard, a herbalist… However, with a tactical mindset and a nose for rare curiosities, you can hire and instruct all kinds of mercenaries to do the fighting and killing for you. In every city and village you vist, new mercenaries are available for hire, each with their own unique set of skills. 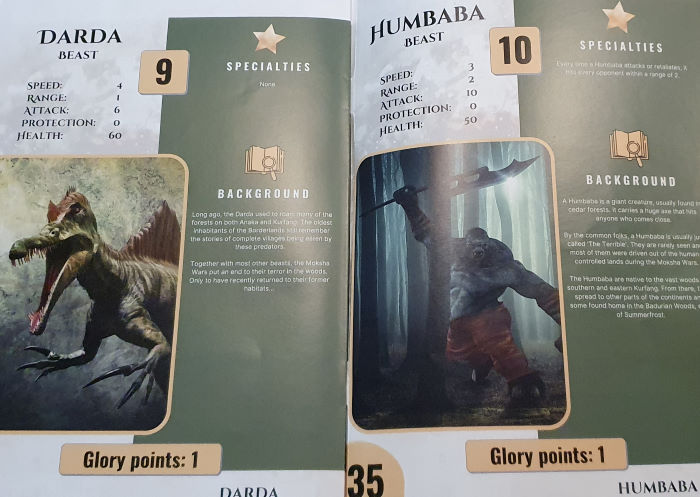 Two of the 50+ enemies you can encounter.

The giant blade of a Humbaba will hit everything in a wide circle around him, while the Darda runs fast at you and just wants to eat you. Each enemy, from the smallest Scitter to the largest Iron Snake, requires a different approach. Work together in finding the best way to kill your enemies, while also looking after yourself and your treasures. 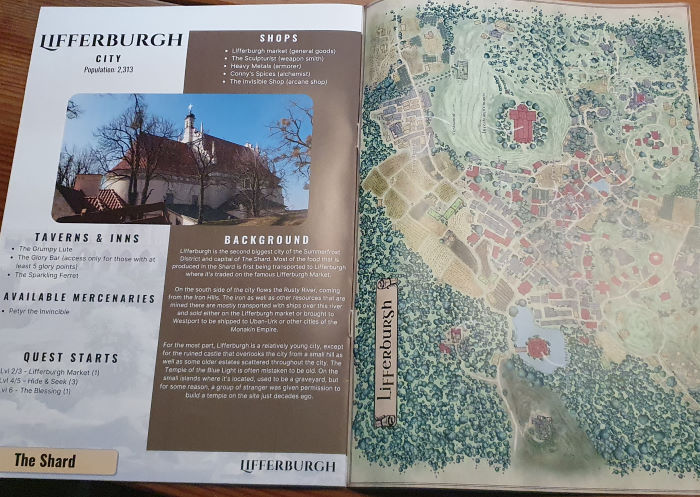 One of the cities where you can buy supplies and start new quests.

More than 30 villages, towns and cities to visit

Beasts & Glory is not just about fighting. The adventures take place in and around Summerfrost, where in between the fighting you can visit all kinds of villages and cities. Here you can restock your supplies, buy weapons, armor, potions and spells or hire a new mercenary to fight in your stead. And of course, this is where new quests and adventures start. 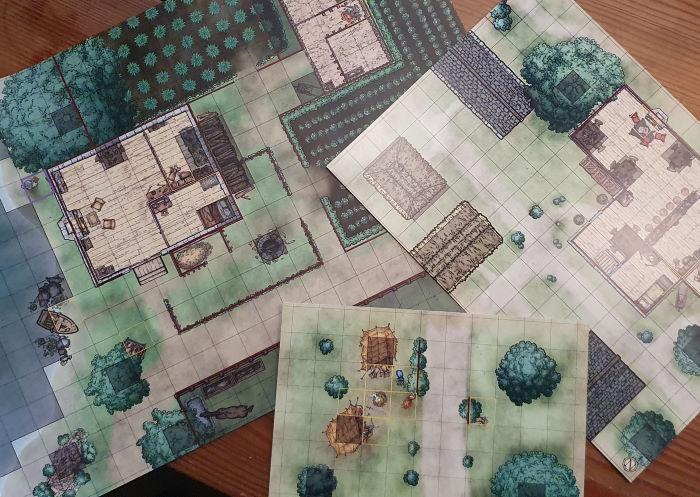 Encounter maps come in 3 sizes, for different lengths of battles.

Use your movement cards wisely and make the most of the weapons and armor you chose to equip for a particular battle. Are you going to swing your sword heroically? Or maybe shoot arrows from a distance? Or did you acquire enough Mind Stones to be able to use your magic staff? Each battle is different and the wide variety of map turns every game night into a unique adventure.

Besides the main quest line of delving into the mysterious rumors about the time machine, there are dozens of smaller quests to play. Some are simple, 1-battle encounters while others have several in order to finish the quest and collect the reward.

Each encounter has a clear instruction on how to set it up, which enemies you’ll fight and the rewards you can gain. On the backside, there’s the story that weaves it all together. But if you’re just in it for the fighting, the summary on the front is enough. 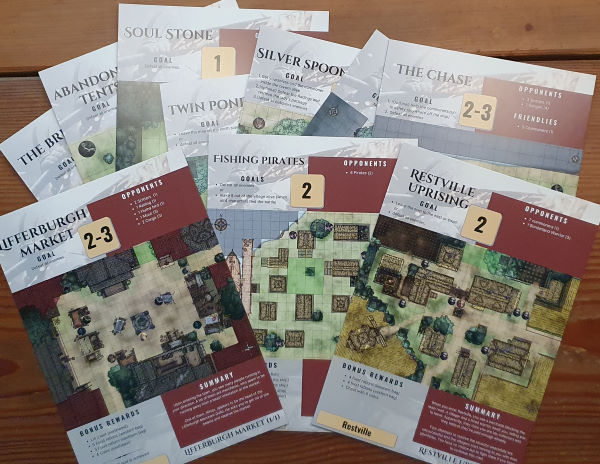 Just a small selection of the many encounter cards in the game. 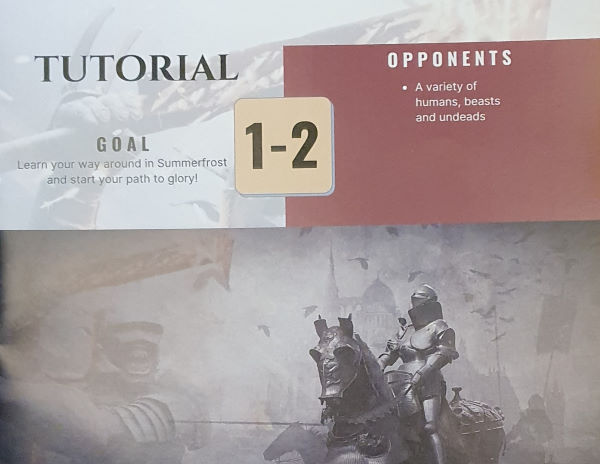 A clear tutorial with 5 encounters will prepare you for what’s to come.

As simple as complex can be

Beasts & Glory is a huge, open world game. The first 5 encounters will help you get started step by step, but after that, it’s all up to you where you want to go and what you want to do.

Each quest and encounter has a suggested level to give you some guidance in what you can and can’t do. But nobody is stopping you if you feel confident fighting that end boss with poorly equipped mercenaries…

Although the amount of cards, items and texts may be overwhelming at first, you will soon find out it’s relatively easy to find your way around.

Testing the first encounters and an impression of how the table will look like, although nothing is in its definite shape or print yet

Work on the Tales of Asnia is in full swing, but still only just started. The ambition is to create one of the grandest and most immersive board games you’ve ever played. That means, it will take a long time to develop, balance and test the game. If you want to be part of that journey and see this unique game concept come to life, then keep an eye out for future updates. If you’re the first to know when the Kickstarter will launch, you’re also in the front seat for great early-bird rewards!

Sign up to the newsletter and receive a one-shot DnD adventure The Queen's Cave for free!