My private project: the Tales of Asnia 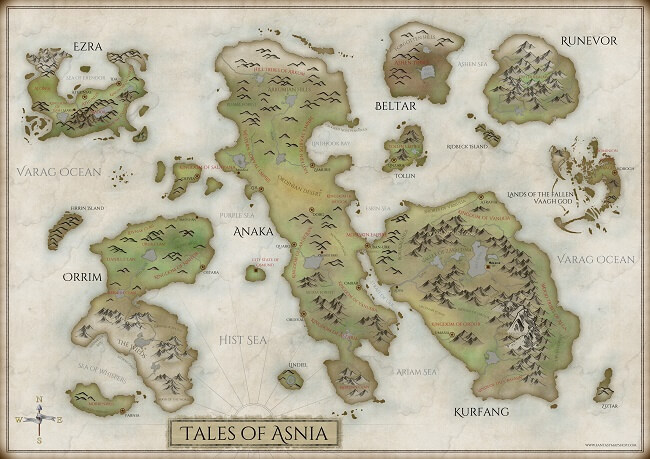 Besides all the maps I make for various people around the world, I’m also creating my very own world. It’s called Asnia and everything that happens in that world, is part of the Tales of Asnia.

For many worldbuilders, a map is something that follows the stories that are already created in your head. For me it’s the opposite: while creating a map, the stories are fighting for a prime spot inside my head. I can place when simple village icon somewhere and I instantly think of all the lives that could possible be lived inside that village. And when I make a village map, I only have to add a ruin, a lighthouse, a bridge or a treehouse and there are stories being developed without me actively taking part in it.

The problem with it is that there’s way more going on in my head than I can ever get on paper. I want to great adventures, board games, escape games and stories in this world. And in my head, many of them exist already, but writing it down in a structured way… that’s a whole different thing!

Luckily, not everything has to be finished simultaneously, or finished at all. It’s always good to know more about your (fantasy) world than other people could ever know. The things that take place as part of the Tales of Asnia that I once started are: