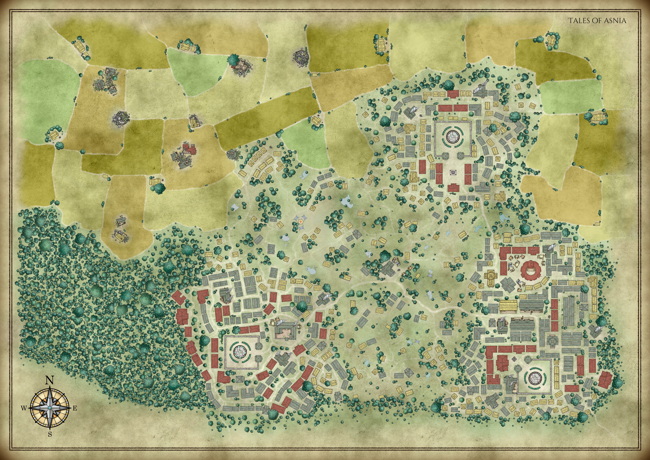 This download contains 2 version: one without labels and one with a dozen marked places in the city. Both are 4962 x 3508 and VTT-friendly (under 8mb)

Nobody knows exactly what happened 20 years ago in Turvana, but many suspect the lord of Zakh-Isma to be behind it. For centuries, the large city had been protected from dark magic by the five Soul Stones, when one morning the northwestern Stone started glitching. Shortly after, the same thing happened to the northern Soul Stone. An invisible smell of death and destruction crept through the streets. Those who could, fled the city. However, many died in the path of this invisible threat. Buildings collapsed with no clear indication what force caused them to fall apart.

While the city was in chaos and death moved further into the center of the city, a hero stood up. The young Etelore, still an apprentice of the famous Anneas the Wild, ran to all three remaining Soul Stones, amplifying them one by one with her exceptionally strong magic. Whether she knew what she was fighting or just taking a gamble, we will never know. What we do know is that Etelore’s efforts stopped the progression of The Glitch, which could very well mean that she is the only one in Asnia to have ever matched the power of the lord of Zakh-Isma.

Unfortunately, the effort was too much for her and together with thousands of citizens of Turvana, she died that day. A statue of her is erected near the southeastern Soul Stone and a festival is held in her honor every year.

The city never fully recovered from this mysterious attack. The northern and northwestern part were never rebuilt. The rubble was used to rebuild other parts of the city and the land was soon claimed by farmers, leaving only the ruins of the two Soul Stones untouched as well as a few ruined buildings.

The land between the three cores of the current city has been left mostly empty. Debris has been cleared out and at few places, new buildings returned, but never close to its former glory. Even the name of the area still reminds of that terrible day 20 years ago. Most people prefer to stay close to one of the remaining Soul Stones, although they live every day with the knowledge that even those can’t fully protect them from what might one day come again…

Be the first to review “Turvana” Cancel reply