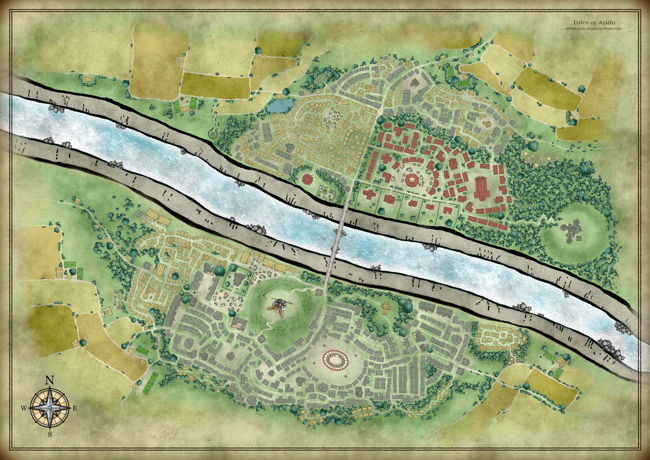 This download contains 2 VTT-friendly versions (under 8MB), both in a resolution of 4962 x 3508. One has the name Umana on it as well as many city locations marked as they are in the Tales of Asnia, which can be used to create your own stories. The other version has no labels and is for you to name.

Umana is the capital of the Kingdom of Ordur.

The central bridge was built in ancient times by a civilization that was superior in many ways, but fell into disarray and eventually collapsed. The bridge spans a 200 feet deep gorge over a wild river. The current Kingdom of Ordur doesn’t have the skills to build another bridge across the gorge, which is why it remains the only way to cross to the other side.

The people of Umana pray to their patron god Bolar every day to keep the bridge intact and miraculously, that has worked so far.

It’s called the Conqueror’s Bridge since the bridge has been more than once the decisive place of conquest throughout the ages. It is said that who holds the bridge, holds the kingdom.

Be the first to review “Umana” Cancel reply