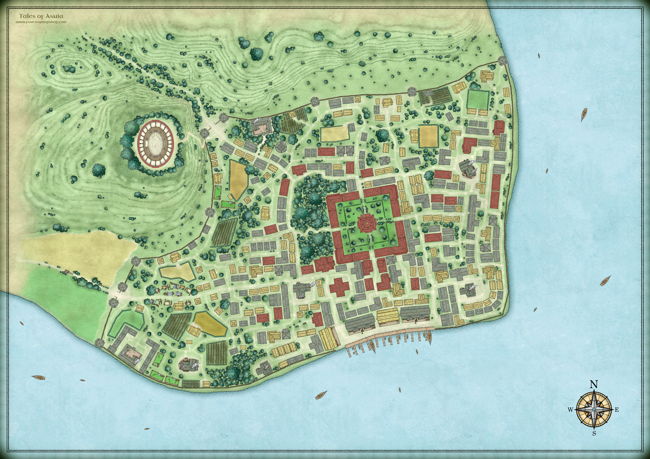 Nestled between Lake Vana and the Lower Iron Hills lies the capital of the similarly named region: Viroa. The town has no history of fighting and wars, but recently, beast attacks coming from the Iron Hills have become more frequent. Also, unknown raiders from across the lake have tried to steal from the town’s warehouses several times over the past months. Therefore, the town elders have decided to build a palisade and guard towers all around the town, with only three entrances: The Iron Gate for the occasional traveler coming from the Iron Hills, the Blacksun Gate which is the main entrance for all traders and travelers from the rest of the Summerfrost District and the port, to keep access to the rich fishing waters and the Jonakin District on the other side of the lake.

Near the gates are barracks that provide the town’s garrison. The Iron Guard also provide protection to wealthy pilgrims wanting to visit the Oblivion Tower in the Iron Hills, even though the locals claim that the real Oblivion Tower is found elsewhere, at a location unknown.

The Temple of Oblivion, in the center of the town, is the place where both locals and travelers go to get rid of disturbing thoughts, mental trauma’s or any feeling of guilt. Already in the gardens around the temple, you can smell a mysterious scent which becomes stronger once you enter. It has an intoxicating effect on people and when you leave, you really feel reborn and rid of all bothering thoughts you may have had.

Another highlight of the city is the Blacksun Arena, located on top of a hill overlooking the town. Here, everyone brave enough can prove themselves by fighting beasts and other creatures, gathered by the Blacksun Guard. Recently, also captured raiders are considered popular opponents for those searching for glory in the arena. In order to fight in the arena, all you need to do is going to the downtown registration office and sign up for a fight, either solo or as a group.

Be the first to review “Viroa” Cancel reply